Today is my 10 year Bloggiversary!!!

It's hard to believe that it was 10 years ago today that I wrote my very first blog post. 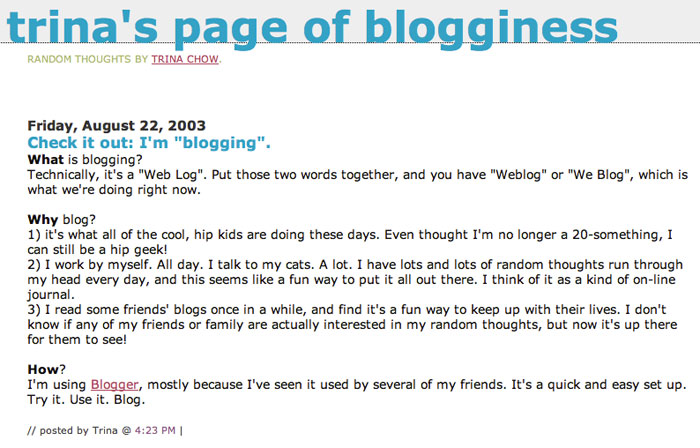 I remember it well: Dick must have been working from home that day. We shared an office at the time, and he told me that he was starting a blog, and that maybe I should, too. I had a handful of friends who were blogging already,and figured I might as well jump on the Blog Bandwagon. Who knew I would keep up with it, and would still be blogging 10 years later?!

I originally thought that this would be a fun way to share things with friends and family (okay, mostly my parents) and to just jot down random thoughts. It was well-before the days of Facebook, and this was a neat way of sharing photos and daily happenings. It was also a fun way to document vacations and special events.

I'm still using blogger, just like I did when I wrote my first blog post on August 22, 2003. They've been bought by Google since then. I used to host my blog on my own domain, but my options became a little limited, so I started to host it on their server about three years ago.

It's pretty amazing to think that I've been blogging for a whole ten years. Who would've thought that I'd have so much to say. Granted, I may not actually be saying much, but it's fun to have an online journal with photos that I can reflect back on and share with the World.

It's been a fun ride, and my, a LOT of things have happened in the last ten years.
Some highlights:

I became obsessed with, and bought my MINI Cooper (named, MINI Driver, of course!)

Got MARRIED!
(and showed some early photos from our wedding)

Was mistaken as a hooker in Shanghai (Because, really - doesn't everyone have a hooker story?)

Was on the Home Shopping Network

Went to Vegas (more than a few times

Went to a few WGIs

Read all the Harry Potter Books

Had our bathroom remodeled

Said goodbye to our Grandpa Chan

Had our backyard remodeled

Saw the most Epic Green Day Concert Ever

Said goodbye to our Grandpa Chow

Signed up for my first multi-day breast cancer walk, then started training with the Warming Hut Hotties!, and finished my first 3Day Walk

Hosted a BUNCH of Halloween Parties!

Moved into our new home

Became a fan of glassybaby then proceeded to Introduce all of my friends to glassybaby, too!

Started Drawing and Painting again, which was the start of my Renaissance Year.

Learned how to make Plum Jam

Got gallery representation for my paintings

These are just a few highlights, of course!

We also did a whole lotta travel in the last 10 years!

Shanghai
Tokyo
Spain with the Craddock AND Chow families!
London,
Yosemite with the family
Hawaii with a bunch of friends
Rome, Florence, and Venice
NYC and Boston
Dubai for Jimmy and Pavan's Wedding
Tokyo (again!) and Kyoto

If you've made it this far, thanks for reading, and thanks for sharing my 10 year Bloggiversary with me! :)
Posted by Trina at 8:32 AM