Morning on the Bay for Miguel's (early) Bday!

Dick and I were invited to a morning mimosa sail on the Bay with David, Miguel, and a bunch of their friends yesterday morning! We were celebrating Miguel's early birthday, which is later in the month.

We were on the Privateer - a really nice-sized sailboat that docks off of Pier 39. We had 11 people in our group, and there was another group of 5 people. There was still plenty of room for more, so I'm not sure what the full capacity of the boat would be.

We were on the Bay from 10:00-Noon, which was just perfect. The sun was out when we first left, and we all had on short sleeved shirts and long pants. By the time we were getting out further, the wind picked up, and the fog began to roll in. By the time we were under the Golden Gate Bridge, it was covered in fog, and we all had our jackets on. :) Ah, San Francisco weather!!

It was such a great morning to be on the Bay. The America's Cup races (or part of them, anyway) are happening right now. There was an event later in the day, but we did see the Oracle boat (catamaran) as it crossed the Bay a few times. It was really cool to watch - so fast!

We were out on the Bay for a total of two hours - one hour to get out to the Bridge and just beyond, and another hour to come back. We were served drinks (mimosas, beer, white wine, and a soda for me!) and enjoyed ourselves while meeting new friends. (we think our fun and festive group may have scared the other 5 people on board, who stayed to themselves way out on the other side of our boat!)

Thanks, David and Miguel, for inviting us on this great celebration with you! We enjoyed spending the morning with you and all of your fun friends, too! 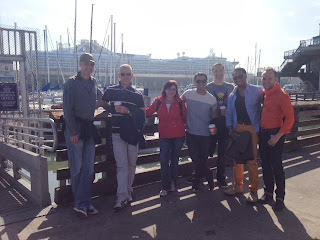 part of the group, meeting early before we boarded 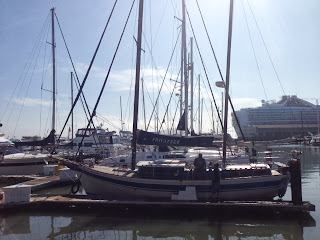 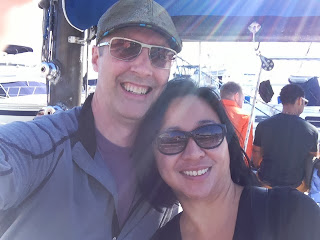 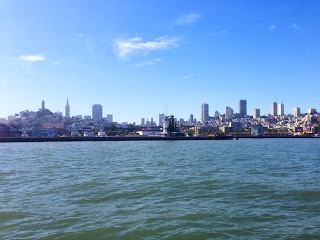 Beautiful view from the Bay 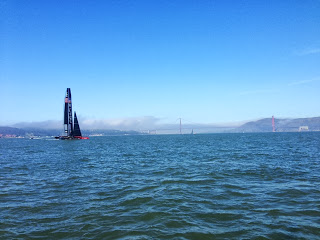 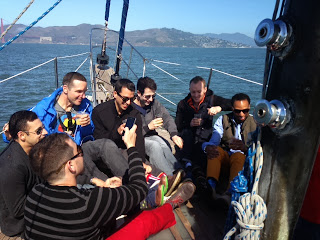 Funny boys, taking a photo of their cute and stylish socks 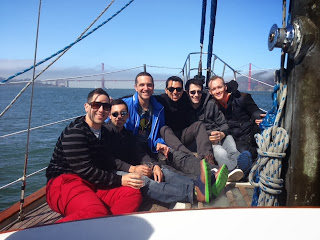 part of the group 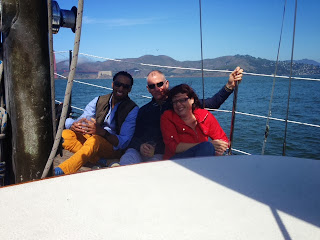 another part of our group 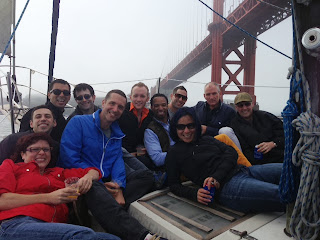 One of the funniest moments happened on our way back towards Pier 39. We were just passing one of the stands for the America's Cup, when my friend, Catriona, sent me a text message with a photo of a Catamaran boat just passing them on the Bay (we had discussed this specific catamaran boat just the day before). I told her that I was on a sailboat on the Bay at that very moment, and that we had just passed by the catamaran that she had sent me a photo of! Next thing I knew, we were passing the stands where she and her husband were, and we were waving to each other from across the Bay!! SOOO funny, and what a crazy coincidence! 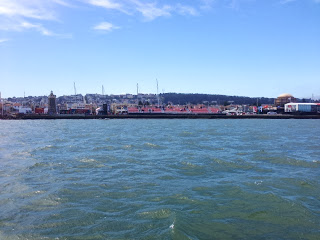 Catriona and Michael are up on the top-right side of the stands! She's wearing a yellow sweatshirt! :)

Labels: friends
Email ThisBlogThis!Share to TwitterShare to FacebookShare to Pinterest