It was a smaller crowd than usual, but that didn't stop us from having a really fantastic time! A great time was had by all, much alcohol was consumed (22 people, 10 bottles of wine and 24 bottles of beer - oh, my!), and fantastic costumes were thoroughly appreciated!

Dick, Christopher and I did a costume trio this year. We did a Social Networking theme. I was Facebook, Dick was the attention getting/trying to stay relevant My Space, and Christopher was Twitter.

Each of our costumes had a "schick": I had stickers that I put on everyone and everything that said things like "Trina Likes this", or "Cool Costume!" or "LOL", etc., I had had a bag full of farm animals (a cow, sheep, pig, etc.,) that I tossed at everyone saying, "Superpoke"!

Dick was "My Space" - trying to remain relevant, by wearing flashing lights, honking his horn, and trying to make sure that people didn't forget him. hilarious.

Christopher was "Twitter" complete with a little stuffed bluebird (who really did tweet!) and a megaphone so that he could "retweet" what everyone else was saying. On his back, he wore a sign that said, "Follow Me".

Each of us wore white boards that we wrote and changed our status on. Or, at least, that was the intent, but I kept forgetting to write anything new!

We were a big hit on Castro Street, which was big fun. The three of us were stopped several times to have our pictures taken. ;)

We had several really great costumes at the party!

Here are some of the highlights:

Richard and Pete as creepy spiders!

Creepy Blane as a spider with an egg sac (ewwww!)

Philip as the Jolly Green Giant

David and Miguel as Batman & Robin

Graham and my sister, who didn't actually wear a costume, but get appreciation credit for coming! Actually, I told Graham that he could be a fourth in our costume since he was wearing a shirt with "SPAM" on it. ;)

Thanks so much to all who came! We had a really great time this year!
Posted by Trina at 9:29 PM 1 comments

It's that time of the year again!

Halloween is Dick's favorite Holiday. The company where Dick works throws a big family Halloween party each year, and as in years past, Dick was asked to emcee the event. Basically, he welcomes people, tells them the schedule of events, but most importantly - he gets to Emcee the kid's Halloween Parade!

I've been going to the party for the last few years because the little kids dressed in costume are so cute! We don't get any trick-or-treaters in our neighborhood, so this is my one chance a year to see the cute kids in costume!

I'm always impressed with how many childrens characters Dick knows during the parade. I gave him a briefing on which Disney Princess is which, (he did a great job figuring them out!) and he did a wonderful job identifying each costume that the kids wore.

Dick wore a scary mask and a long, dark hooded cape as his costume. I told him he had to take his mask off before the parade, because I was afraid he'd scare too many of the little kids! :) 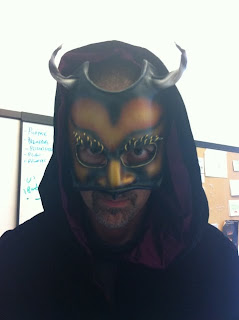 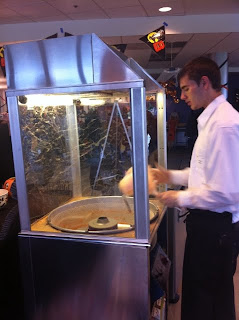 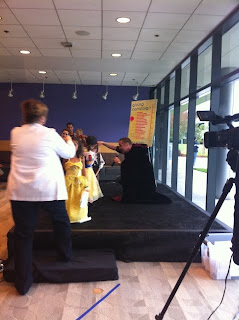 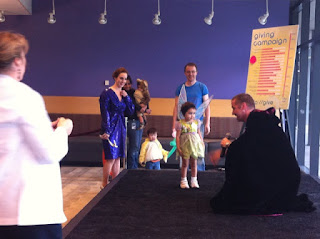 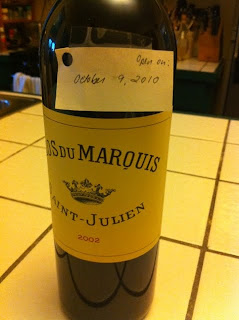 We're a little late (19 days, to be exact) but we just opened the five-year anniversary bottle tonight. It'll go well with the roasted chicken I'm making. :) 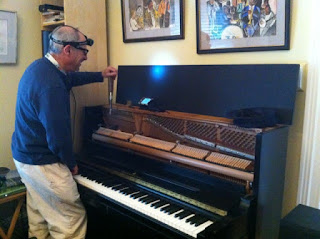 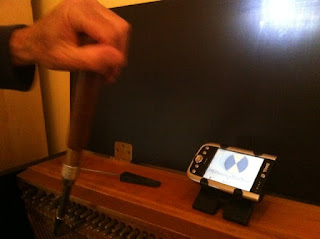 It's been more than six years since the last time I had Dick's Piano tuned. We were way overdue!

This is Tom, the piano tuner. The last time he came, he used a program off his laptop to help him. Since then, he's switched to a much smaller, handheld tuner program. It's interesting to see how technology changes, even in the most unlikely fields.

I should really do this once a year or so. Dick is going to be so happy to play his newly-tuned piano when he gets home tonight. :) 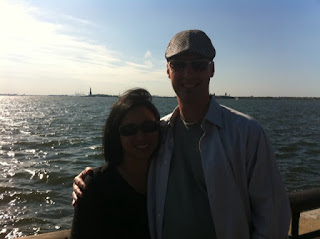 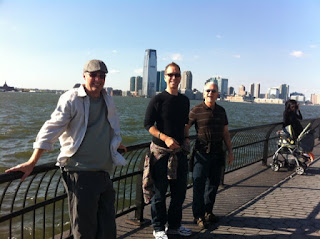 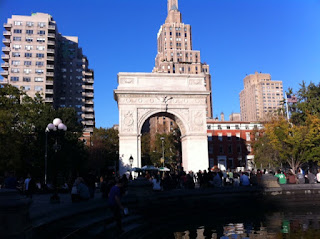 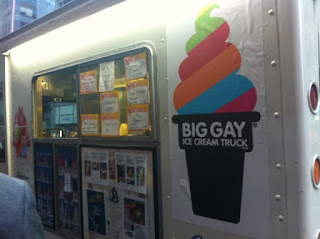 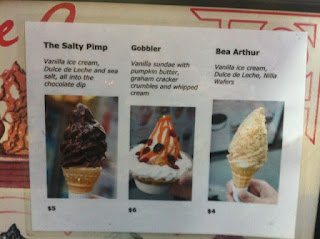 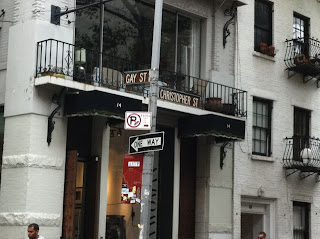 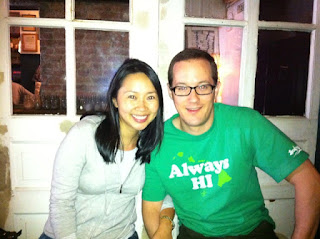 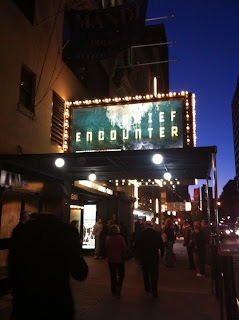 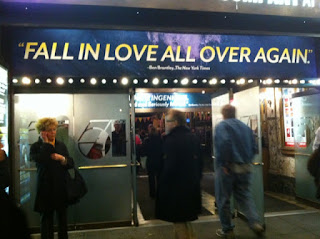 We had a really nice Brunch and afternoon with Chris and Vivian in the Village. In the evening, we saw "Brief Encounter" at Studio 54.
Posted by Trina at 8:17 PM 0 comments 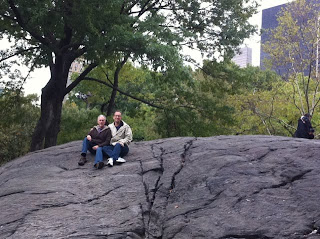 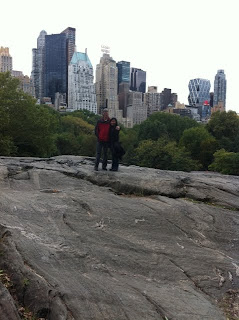 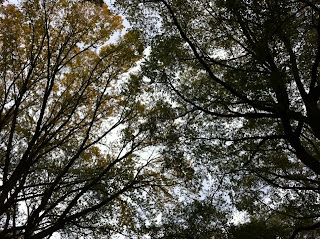 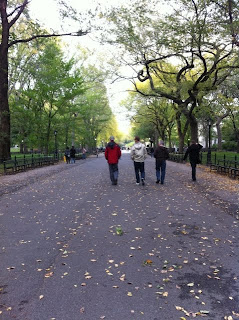 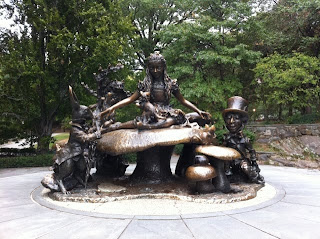 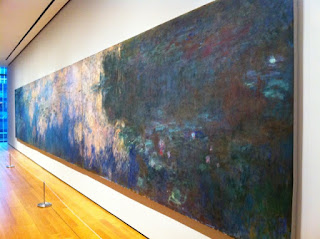 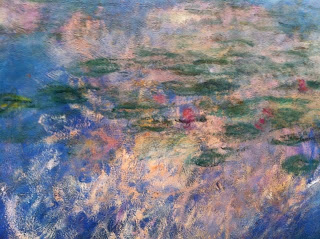 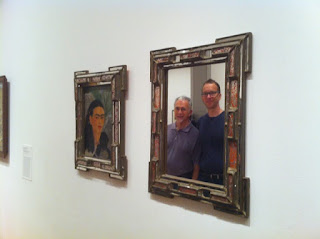 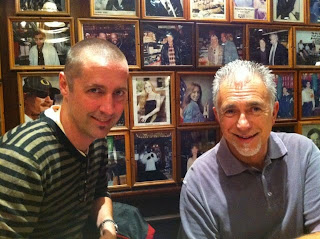 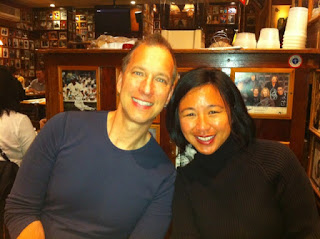 Playing with my new iPhone App 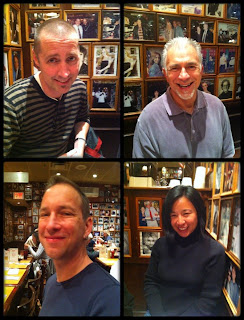 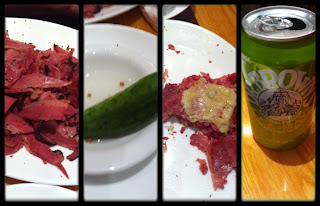 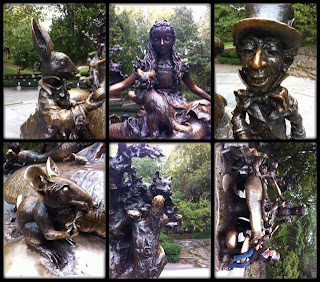 Took these series of photos with the MoloPix app on my iPhone. Fun!!
Posted by Trina at 3:12 PM 0 comments 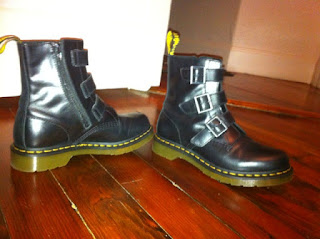 I bought a new pair of Doc Martin Boots last weekend. Now, for anyone who knew me in the mid-90s, you may remember that my Doc Martin boots were pretty much the only shoes I wore at that time. I eventually wore out that first, beloved pair (after several years), and bought another pair about 12 years ago. Unfortunately, that pair didn't live up to the first (irregular pair that just weren't great) so I stopped wearing them eventually. The fact that I was out of art school may have had something to do with that, too.

Anyhow, this new pair I found is just awesome!! They buckle up, rather than lace up, and (even better!) the zip up so they are on and off in a jiffy!! Plus, they're just uber-cool! Or, I'm simply in denial, and I'm trying to relive my younger days. ;)

So, it turns out that old habits do indeed die hard. So excited about my new, cool boots!
Posted by Trina at 4:59 PM 0 comments

My Thank You card to my Sponsors

This is the Thank You Card that I made and sent out to everyone who sponsored me for the Susan G. Koman 3-Day for the Cure. I had already sent out a Thank You over email, but thought it would be nice to send a card in the postal mail, too. (Because, isn't it always nice to receive a card in the mail?)

Labels: 3-Day for the Cure
Email ThisBlogThis!Share to TwitterShare to FacebookShare to Pinterest

Let them eat CAKE! (and rice-krispie treats, too!)

Yesterday was a milestone day at Dick's work. The team celebrated the completion of the latest wave in their big project. Dick's wonderful admin, Kathy, also thoughtfully incorporated Dick's 15th Anniversary with the company into the celebration.

One of the guys on the team, Greg, is an incredibly talented cake maker/decorator. This is his hobby (and a time consuming one at that!). You may remember the uber-cool Halloween Cake that he made last year, which we served at our Halloween Party.

Well, Greg really outdid himself yesterday. He made FOUR cakes for yesterday's celebration. (apparently, there were actually 5, but all of the elements to the fifth cake didn't make it).

These cakes were simply amazing - I couldn't stop taking picture!

The "New Busy" Cake, and the poster which inspired the design.
(yellow cake with raspberry filling)

The t-shirt cake (the t-shirt design was something that Dick helped create last year, and is apparently a favorite amongst the team.
(chocolate cake with raspberry filling)

The Sign Off Cake
(yellow cake with lemon filling)

As an added bonus, Greg make a special "cake" (actually rice-krispie treats - Dick's favorite!) for Dick's 15th Anniversary with the company. Kathy presented the cake on a separate table along with Dick's 15th year award and a card for the team to sign.

Greg and Kathy knew that one of Dick's favorite hobbies is playing poker, so Greg made this incredible rice-krispie cake in the design of a poker table - complete with poker chips, cards, a cigar with ash try, a dish of assorted nuts and a bowl of Doritos. Now, here's the thing: everything on here is edible, and not only edible, but hand made by Greg. For example, the nuts are actually white chocolate, molded and painted to look like a variety of nuts. The Doritos - while the real ones would be edible, Greg made these by hand, too! He made a mold out of actual chips, and created these using raspberry flavored fondant. He really is a master at his craft!

Greg and Dick standing with the Poker Table Cake

Here are some fun detail shots:

We really did eat the cakes!

The hand of cards
Greg told me that he used some kind of printing technique for the cards - still edible!

Many thanks to Greg for all of the hard work and countless hours (he stopped counting after 100 hours!) that he put into creating these amazing edible pieces of art! Also, thanks to Kathy for putting this whole event together, and for thoughtfully inviting me to the party!
Posted by Trina at 11:08 AM 1 comments