In Loving Memory of Chuck Chow

The world lost a great man today.
My Grandpa, Chuck Chow, passed away peacefully late this morning, surrounded by his loved ones, at the age of 87.

My Grandpa lived an extraordinary life - it was very full, very fulfilled, and full of love.

Grandpa celebrating his 87th Birthday with his children, his wife, and his Great-Granddaughters

I'm not sure if my Memory or knowledge of his life is entirely accurate, but this is how I remember it:

Chuck Chow was born on March 7, 1922. He was adopted by a family in a small Chinese Village in Southern China who did not have a son. He was raised by his mother, his Grandmother and his Great Grandmother. He went to school, and worked in the rice fields of his village.

He was the first person to leave his village in the early 1940s at the age of 16 or 17. He came to the United States after having found someone in California who he paid to "sponsor" him by claiming he was related. He changed his surname to that of his sponsor.

He moved to Stockton, California, and quickly found a job to earn money. He wasn't in the country very long before he found he was drafted to serve in the US Army during World War II. He was trained in Hawaii, then went to fight in the war. One of his commanders warned him to stay near him so that his own squadron wouldn't accidentally fire at him, mistaking him for Japanese. 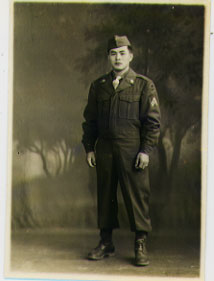 After the war, he was stationed in Tokyo, Japan to work at the Imperial Palace.

When he finished his service in the military, he returned to California, then travelled back to his old village in Southern China where he took part in an arranged marriage to my Grandmother, May. She was only 16. He was 23. They had never met before they were married.

Chuck and May moved to Stockton together where they raised 4 children: Henry, Billy, Lani and Wesley. 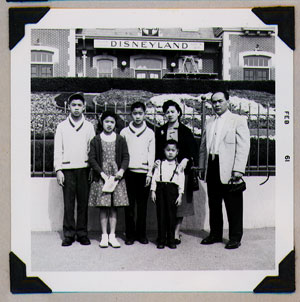 My Grandfather worked as a butcher at the local Central Mart Grocery Store. He retired in the late 80s. He stayed in touch with, and always sent back money to his family's village in China.

My Grandparents were very active in the Chinese Community in Stockton, and was especially active within the Chow Association. 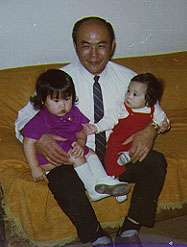 Proud Grandpa with Tiffini and Bruce, 1969

My Grandfather was a world traveler, and loved going to new places and learning about different cultures. My Grandparents took their first trip back to China, and their villages in Southern China in the early 80s. They took all of their children to their villages in 1987, then took another trip with their children, and 3 of their Grandchildren (including me and my sister) in 1992. When we were there, we were able to see the village that my Grandfather grew up in: the fields he worked in, the small room where he went to school, and even the tiny room in which he was born. We saw the new school building which he had helped fund, as well as the new village gate. We also met his mother, and were able to celebrate her 90th birthday with her, their village, and all of the neighboring villages. 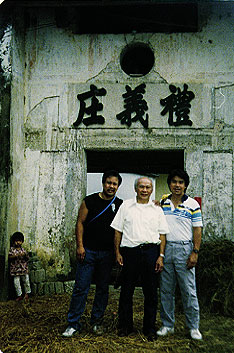 Wesley, Chuck and Henry in front of Grandpa's Village Gate, 1987 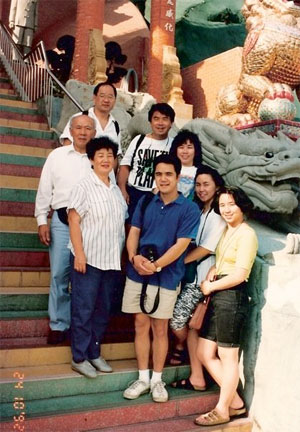 Last year, in March of 2008, at the age of 86, my Grandparents were able to go on a trip with their two youngest Grandchildren, now in their 20s, to share their villages with them as well. My Grandfather loved the trip, was incredibly active, and walked the entire time.

My Grandfather shared his life with all of us by showing us where he came from, and the sacrifices he made for all of us by being brave enough to move the United States at age 16 to truly live the American Dream. I am eternally grateful for the opportunities that he has opened up for all of us.

My earliest memory of my Grandfather was probably when I was 3 or 4 years old. My family was living in Modesto, CA, and my Grandfather was visiting from Stockton. I remember that he brought two pairs of training chopsticks with him to teach my sister and I how to properly use them. One pair was pink, the other was blue. They were made of plastic, and had tiny little Chinese figurines on top of each stick. I remember his patience with me as he tried to explain the proper technique to a 4-year old.

I'm chuckling to myself as I recall another story from just a couple of years ago. My sister and I tried to visit my Grandparents every few months to take them out to lunch, and them run some errands (usually at Costco) afterward. We almost always had dim sum for lunch together. There was one time a couple of years ago when my Grandfather noticed that I was holding my chopsticks incorrectly. He had to teach me all over again the proper technique! :)

Whenever my sister and I would come for our weekday visits, we were able to observe one of my favorite and most endearing habits of my Grandfather: Every weekday at 3:00, he would drive to the Mall to meet his friends. They would go to McDonald's, order a senior discount coffee, sit down, and people watch together. He did this for years. Sometimes, I would call my Grandparents house in the afternoon, my Grandmother would answer, and she would always say that my Grandpa was "at the Mall". The memory of this still makes me smile. 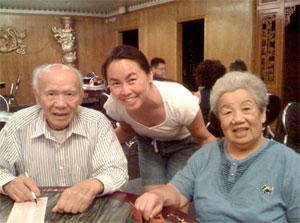 My Grandfather lead a very full life - he was very active - socially, mentally and physically for more than 86 years. He really only slowed down due to his medical problems over the last few months.

My Grandfather was married to my Grandma for more than 62 years. On their 60th Anniversary, the entire family (that's 20 of us in total!) went to Las Vegas for a few days to celebrate together. What a great time it was. It makes me so happy knowing that we were all able to do that together. 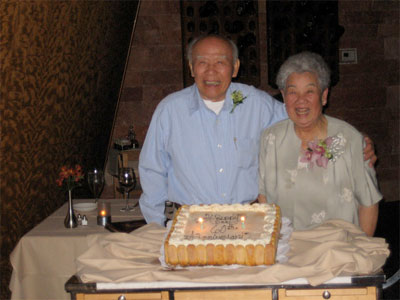 My Grandfather was a great man. He shaped the lives of his wife, children, grandchildren and great grandchildren. He allowed us all the ability to lead great lives full of opportunity and love.

Just a few months ago, at the end of August of this year, the entire gathered together to have a professional portrait taken. The last time we had a full-family portrait was in 1982 - we were long over-due. My Grandparent's children and grandchildren all chipped in to have the portraits taken as a gift to Grandma and Grandpa. I cannot express how glad we all are that we were able to have this done while Grandpa was still here with us. 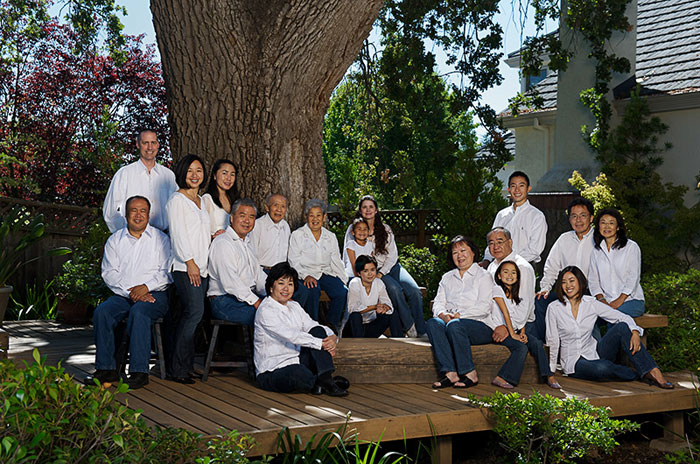 I am eternally grateful to have been able to have had my Grandpa in my life for over 39 years. He is tremendously loved, and will be forever missed.

Goodbye, Grandpa. I will always love you.
Posted by Trina at 9:31 PM

Labels: family
Email ThisBlogThis!Share to TwitterShare to FacebookShare to Pinterest

sad to hear the news. thank you for sharing a glimpse of your grandpa and family history. i could only wish to live a fruitful life like he did.

i'm glad you guys were able to take a family picture!

Thanks Trina for a great reflection; indeed a great man.