What a nice way to start a weekend!

Yesterday evening, one of my neighbors invited me to join them in a Castro Neighborhood Walking Tour. My neighbors arrange a tour group each year as part of a fund raiser for the Law School where one of them teaches. They found out yesterday that two people had bailed out, and they had two open slots in their group. I love this kind of thing, so I jumped at the opportunity.

The tour was led by Kathy of Cruisin the Castro. It was a very nice walking tour that lasted about 2 hours, plus we had lunch together at Firewood Cafe. We met at the Gay Pride flag pole at Market & Castro at 10:00, and I got home just before 2:00.

I really enjoyed the tour, and even learned a little bit more about the history of our neighborhood. As you all know, Dick and I love to walk around our neighborhood and the city during the weekends. It was great to learn a few new things that I can now share with visiting family and friends.

Today was the first time that I've ever gone to the Pink Triangle Park and Memorial. I have always noticed it from afar, but I'm embarrassed to say that I've never walked through it. It is so well done. I'm really glad that I've finally learned more about it.

One of my favorite parts of today was it was the first chance I've had to spend quality time with my neighbors, Clay & Michael. I've known them both for the 8 years that we've been neighbors, but we've never had a chance to spend much time together. We usually bump into each other on the street or within the neighborhood, and will have a nice chat to catch up. 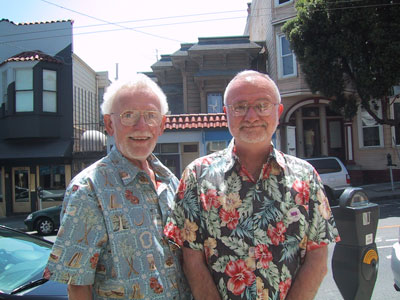 Clay and Michael - together 41 years, and counting...

Clay & Michael bought their house in 1975. I think it's fascinating to think of all of the history of this neighborhood that they've witnessed first hand: they gave me their account of the early years of the AIDS epidemic, and how it affected so many people on our block alone, let alone the entire neighborhood. They also discussed the assassination of Mayor George Moscone and Supervisor Harvey Milk. I could listen to them talk for hours on end.

My favorite thing about Clay and Michael: as of August 1st, they've been together for 41 years. That's so amazing to me. I know of so few couples, gay or straight, who have been together for so many years. What an inspiration.
Posted by Trina at 2:44 PM