With our big move up to Seattle coming soon, I've been researching various ways to get Noe up to Bellevue with us. Poor Noe doesn't travel well. Even when we go to the V.E.T., I have to sedate her on our way there, and she has to be tranquilized or gassed once there for her check-up. It's really terribly stressful on all of us.

I've decided that the best option for traveling to the Northwest would be to bring her with me on an airplane. While doing research on things I can do or buy to help relieve travel anxiety, I came across the Thundershirt for Cats.

Here's an product description from the Thundershirt site:
ThunderShirt uses gentle hugging to calm your dog or cat. With its patented design, ThunderShirt’s gentle, constant pressure has a dramatic calming effect for most dogs and cats if they are anxious, fearful or overexcited. Based on surveys completed by over two thousand customers, over 80% of dogs and cats show significant improvement in symptoms when using ThunderShirt. ThunderShirt is already helping hundreds of thousands of dogs and cats around the world and is recommended by thousands of veterinarians and trainers.How does ThunderShirt work? Experts believe that pressure has a calming effect on the nervous system, possibly by releasing a calming hormone like endorphins. Using pressure to relieve anxiety in people and animals has been a common practice for years. Below are several examples.

My sister-in-law, Meg, and her family have a family dog named Tucker. Tucker has had a Thundershirt for a while, and it seems to really help him with his anxieties of having people come to his house.

With this in mind, I decided try one on Noe. Honestly, I didn't think it would actually work, but figured it was worth the shot.

It came in last week, the day we came home from our week away in North Carolina. We draped it on her first, which she didn't seem to mind at all. We then fastened the velcro strap around her neck - she still didn't mind. This was already a nice surprise.

Finally, we strapped her in. Shockingly, she still didn't seem to mind. In fact, she just kept purring, and knitting. :)

Apparently, one of the common early affects of putting a Thundershirt on a cat is what they call "Freeze and Flop".

More about the "freeze and flop" from their website:
When first wearing a ThunderShirt, some cats will behave as if they are immobilized and may even “fall over”. Don’t worry! The ThunderShirt is not causing discomfort; they just need time to adjust to the new sensations. Cats are amazingly sensitive to touch and sometimes requires a little more adjustment time in the beginning. But this also means that many are even more responsive than dogs to the gentle, calming pressure of a ThunderShirt!
If your cat initially appears uncomfortable or does the “Freeze & Flop”, please do the following. Put the ThunderShirt onto your cat with very light pressure and for 5 to 10 minutes, try to engage your cat in play with a favorite toy or a laser pointer. If your cat continues to look uncomfortable or still refuses to move freely, remove the ThunderShirt for a short period and then repeat the process two to three times. If still no success, try repeating the process with longer breaks in between (e.g. wait a day and then retry).

Noe is experiencing the Freeze and Flop, but again, this doesn't actually seem to bother her. We've been putting it on, and leaving it on her for about 10-15 minutes at a time, a few times a day. She doesn't ever mind having it put on, but we don't want to have it on her too long if she's still adjusting to it.

I'm pleased with the results of the Thundershirt so far, and am hoping that this may make Noe's first plane trip with me (next month) a little less stressful for both of us. 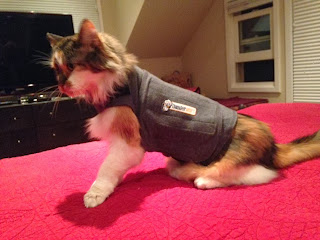 Noe's reaction when we first put her new Thundershirt on 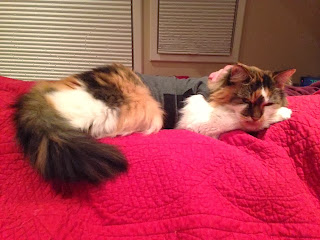 getting settled in already 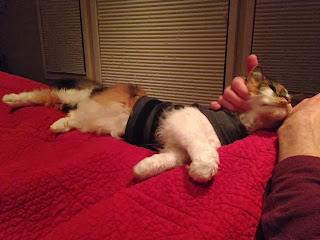 The "Freeze and Flop", but still perfectly happy 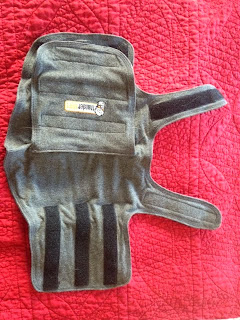 The Thundershirt for Cats 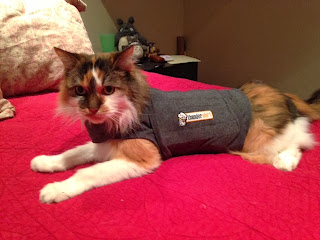 Noe is still getting adjusted to her Thundershirt, but doesn't seem to mind it so far

Labels: kitties
Email ThisBlogThis!Share to TwitterShare to FacebookShare to Pinterest

First time we put a standard cat harness on Max, he did the freeze & flop. Kevin made a "harness" out of industrial strength velcro instead and he's fine (kind of hard to walk a flopped cat!).