Reconnecting with a friend of over 20 years! 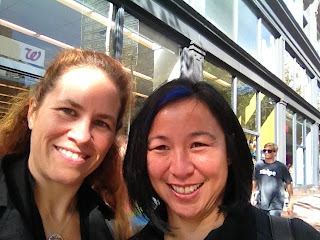 Today, I had lunch with a friend who I haven't seen in at least 20 years!

I first met Keather when I was one of her color guard instructors when she was a sophomore in high school in 1988. I continued to teach her until she graduated in 1990. She was guard captain in 1989 and 1990, and made WGI Scholastic A finals for the first time her Senior Year!

We reconnected via Facebook a few years ago, and have had a nice time getting to know each other as adults ever since!

We figured the last time we saw each other was probably at WGI, 1991, which is really hard to believe. We had such a nice time visiting today. It was as if no time had passed at all. It helped, of course, that Keather hasn't aged a bit since she was in high school. :)

Thanks for the lovely visit today, Keather! I look forward to seeing you again soon. xo
Posted by Trina at 2:51 PM

Labels: friends
Email ThisBlogThis!Share to TwitterShare to FacebookShare to Pinterest