Why I shouldn't bake first thing in the morning 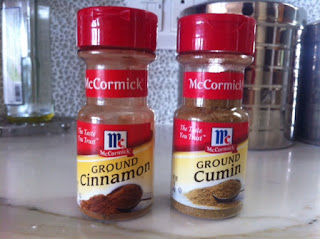 Dick is working from home today, so I thought I'd make us a treat and bake a coffee cake for breakfast.

I was putting together the ingredients for the streusel topping, which included 1 tsp of ground cinnamon. I reached into the spice drawer, grabbed the cinnamon, measured it out, and added it to the brown sugar and flour.

And then I noticed that it smelled a little funny.

I actually thought it was all hilarious, and was laughing at myself when my Gay Boyfriend came in. He told me he had recently done the same thing!

I had used the last of my brown sugar in this recipe, so I had to try to scoop out the cumin, rather than start fresh. I think I got most of it, and we decided to add some All Spice to the mix, just to detract from any cumin that may be left.
Posted by Trina at 9:07 AM