I took the afternoon off and went to the new California Academy of Sciences with my parents today. We had a really great time! 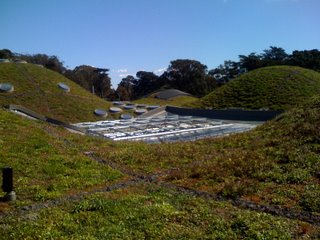 We started at the top - we went to check out "The Living Roof" first. It was super cool. I think it was one of favorite parts of the entire museum. 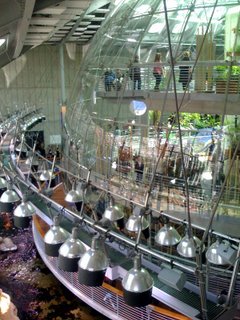 Next, we walked around the top level (level 3) to get an overview of the building and exhibits. Here's a photo of the Rain Forest exhibit, which, unfortunately, closed later in the afternoon right before we were going to go in. Apparently, their elevator system has having problems, and they are the only way out of the exhibit (except for fire escapes). 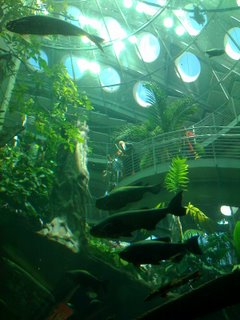 The Steinhart Aquarium is now on the entire lower level. The exhibits were really nice, but my favorite part was the open walkway tunnel where you could sit underneath the aquarium, so through it, and above it into the other two levels of the museum.

We were lucky that the three of us were able to go on a weekday afternoon. It was certainly crowded enough, with plenty of families, seniors, tourists and school kids on field trips, but I'm sure it was far less busy than if we had tried to come on a weekend!
Posted by Trina at 8:08 PM