It's been almost 3 months since the first time that I donated Platelets and Plasma at the Blood Center. I had no idea that so much time had passed since I went in!

I donated again today, with good success. I made it over the iron-level hurdle with no issues again (thanks to those multi-vitamins). The donation part seemed to have taken a little longer today - about 1.5 hours this time around.

If I understand correctly, they only collected plasma from me today, whereas last time, they collected both plasma and platelets. Not sure why. Maybe they were in higher need of plasma?

Here's the explanation of plasma donation.

And here's an explanation on platelet donation.

Next time I go, I'll ask beforehand what they plan to do. (just out of curiosity.)

Once I was done, I asked how many pints/ounces of plasma had been collected from my donation. I was surprised to learn that I had donated 2 units of plasma today. She said I had an unusually high platelet count for my size, which is why I was able to yield so much plasma. Who knew? 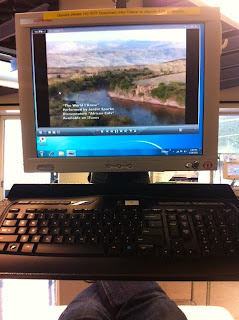 Here's the computer monitor/keyboard which hangs from an arm above the chair that I was in. I watched TV (with headphones) and read a book while I donated. 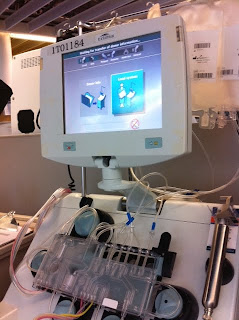 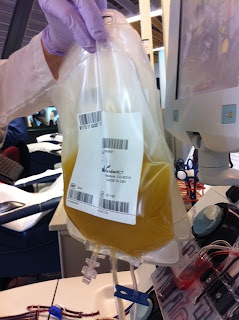 After I was done donating, I went to the snack bar for my requisite doughnut. To my surprise: no doughnuts! Apparently, the Blood Center of the Pacific stopped providing doughnuts a couple of weeks ago!

That's one of the few times that I allow myself to eat a doughnut. :(

Since I had a craving, and I felt justified, I decided to drive to a doughnut store after leaving the Blood Center.

When I mentioned my plans to one of the volunteers (who is disappointed that they no longer offer doughnuts), she said, "But, then you'll have to pay with money. Here, you only have to pay with blood." ;)

PS: I had an apple fritter - much better than the small selection they usually offer at the blood center anyhow! :)
Posted by Trina at 9:31 PM