Our friends, John and Gina, live on the fourth floor of our building. They live on the same floor as the building concierge/security, and pass by the concierge desk on their way to their apartment.

John and Gina mentioned to me a month or so ago that sometimes the concierge desk has cupcakes from the cupcake store in our building. The store brings the day's extras (after they close) to the main security office in the building, and sometimes they bring a box of cupcakes to share with our security/concierge desk.

I asked Gina and John to let me know when they see cupcakes at the concierge desk.

This is the text message I got from Gina tonight. 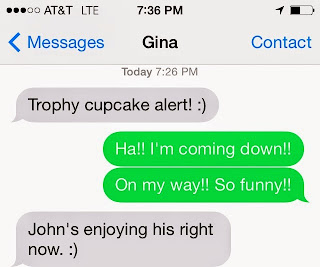 When I got down there, there were 6 cupcakes left. I chose a vanilla cupcake with Chocolate frosting. Yum! I met a neighbor who was picking up some packages, and told him that he should grab a cupcake, too. (He did) 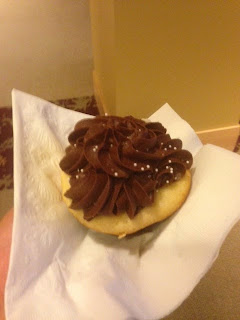 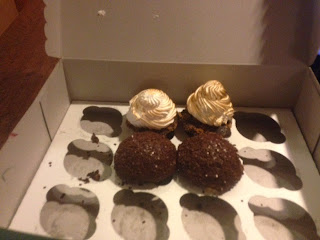 My cupcake was so yummy, and perfectly times, as we had just finished dinner.

Thanks, John and Gina for the cupcake alert! Just another reason why I don't think you should ever move. :)