First and foremost, today is our 4th Wedding Anniversary! Yay! What better way to spend it than a fantastic day in New York?

What a great day it was. We slept in (always nice) then had a nice little breakfast at a local cafe.

We spent the early part of the afternoon at the MOMA. What a wonderful permanent exhibit they have! We were also lucky enough to catch a special Monet Exhibit which featured 3 gorgeous and huge panels of Monet's water lilies arranged as a triptych. It was amazing. Can't capture it at all with a camera, but I tried. :) 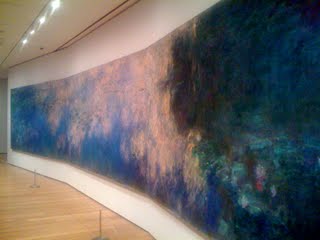 We had a late lunch (3:00) at the touristy, yet incredible Carnagie Deli. I went in with pretty high expectations, and was not disappointed! It was, hands down, the best hot pastrami sandwich I've ever had. Dick and I shared one sandwich - they are huge! Dick doesn't eat cheese, so wanted to make sure that the sandwich wasn't served with cheese. When he asked our server what comes on the sandwich, she replied, "Nothing but pastrami on bread". It simply didn't need anything else. Except for the brown mustard on our table which we added. Spectacular! 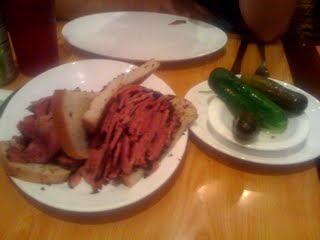 We strolled around Midtown for a while, eventually making our way to Rockerfeller Center. We only walked through it, and observed the ice skating rink. It was pretty cool. 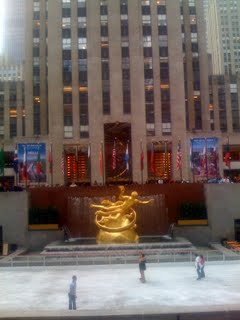 On our way back to our hotel, we made one more stop to the NYC Public Library. What a gorgeous building, and what an incredible resource!

The big treat of the night was seeing Hugh Jackman and Daniel Craig in "A Steady Rain". It's a 2-man show which only opened last week, and has a 12 week run. We had the most amazing seats: 3rd row, center. That's right, we were sitting less than 10 feet away from Wolverine himself. :) The show has received mixed reviews, so we weren't sure what to expect. We were pleasantly surprised, and we both really enjoyed it! Daniel Craig was very, very good, but Hugh Jackman was absolutely mesmorizing! That man has amazing charisma. What a treat it was to see both of those men on stage. It was a once-in-a-lifetime experience. I feel so lucky that we were able to see it. 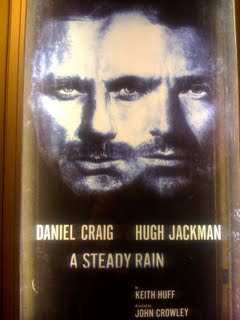 We capped off our evening at a little French Bistro on Restaurant Row.

What a wonderful day, and a great way to spend our anniversary together. 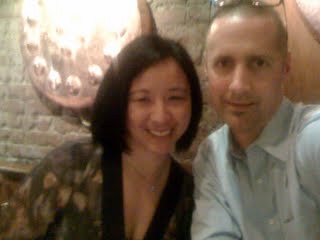