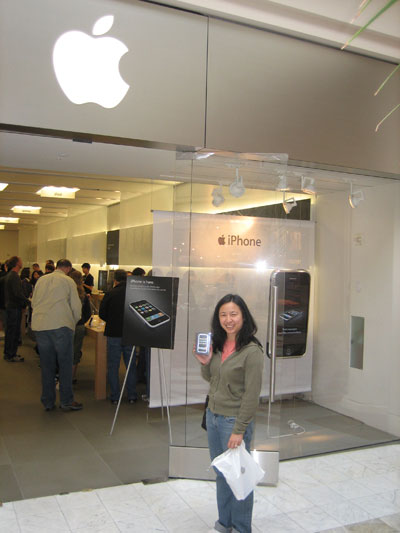 Okay, I admit it: iCaved.

About two weeks ago, my Mom and I had a discussion about the soon-to-be-released iPhone. My Mom had mentioned that my Dad was trying to talk her into switching cell phone service providers so that she could get an iPhone.

Something along the lines of:

However, I specifically remember that I also added:

"But, I probably said the same thing about the iPod, so what do I know?"

Later that day, Dick came home and asked if I'd watched the 20-minute guided-tour online at apple.com about the iPhone. No, I had not.

A couple of days later, as Dick was out playing golf, I watched it....

When he came home, I told Dick I had watched it, and that I got it.

I had a newfound desire to own an iPhone.

Luckily, this was a mere 1 week before the release of the phone.

Even with all of the release hype, we decided that I should probably wait a few months for Apple to shake out the bugs, etc., Well, the iPhone was released, the reviews were (for the most part) really positive, and Dick had a chance to play with a few of them at work. The verdict: it really was as cool and amazing as we were led to believe.

So, I should add my disclaimer here:
I've had my last cell phone since December, 2003. I loved my little Samsung flip-phone, but I've always wanted to be able to sync my contact and calendar to it. Having email would be a huge bonus.

I decided to wait to get a new phone until I got a new computer with Bluetooth. Enter my new MacBook Pro - that I got about 3 weeks ago. Now, I felt ready to start looking for a phone. I was actually looking at Razrs the day my Mom mentioned the soon-to-be-released iPhone to me, and I decided that it would be wise of me to wait until they came out and to assess all of my options.

So, yeah, I watched the online guided tour, and I was pretty much hooked. The reviews that I had read by early adopters were pretty favorable, and Dick's friends who had them at work were really happy with them. There was only one thing left to do: I had to try to out for myself.

I went to visit Rob and Sharon on Friday, and Rob gave me a demo of his phone. Five minutes later, and my mind was set. It would just be a matter of time.

I was fully ready to place an order online and wait the 2-4 weeks until delivery. On a whim, I called the Apple store at the Stonestown Mall on Saturday around 1:00pm. I asked, if by chance, they had any 8GB iPhones in stock. To my surprise, they said they had a few left, and that if I came in soon, I should be able to get one. Dick and I ran out the door, and flew to the mall. We waited in line behind 2 other people, and happily, were able to buy an iPhone.

I'll write about the set-up process, and my initial review in another post. I think this one is getting long enough.

Hmm, there is no mention of your question to the oracle nor his response and how that played into your caving...