As I've mentioned before, Dick and I routinely enjoy playing Xbox Live with some of our friends. We play with friends who live in San Francisco, San Jose, and Seattle. To clarify, these are all friends who are our "real-life" friends - not people who we've met while playing online.

Our friends Reeves and Paula moved to Dublin (Ireland, not the Dublin near Pleasanton) in July. We miss them very much. It took a while for them to get all of the stuff that had been shipped via a slow boat, and then to get things unpacked and organized. A couple of weeks ago, Dick and I played Xbox Live with Reeves for the first time since he's been in Ireland. I have to say: technology is really amazing sometimes. Playing with Reeves in Ireland was no different from playing with him while he was here. For those who aren't hip to Xbox Live, it allows players to play against or with each other, AND you're able to talk to them with a cool headset and mic. It's actually oddly social - we may not be in the same room, but it's a really fun way to spend time with each other - especially when our friends live several miles away (or in another country!)

Last week, I sent an email out to our regular Xbox Live friends saying that Reeves and I had set a date and time for our next game: Sunday, October 29th: 11:00am. (which is 7:00 in Dublin) We had 5 people sign on: Dick, me, Christopher, Mike, and Reeves.

Think about this: the 4 of us were playing in CA while Reeves was in Ireland! It's SO cool.

I asked all the guys to have a photo taken of them while they were playing. I thought it would be fun to illustrate the coolness of the technology. 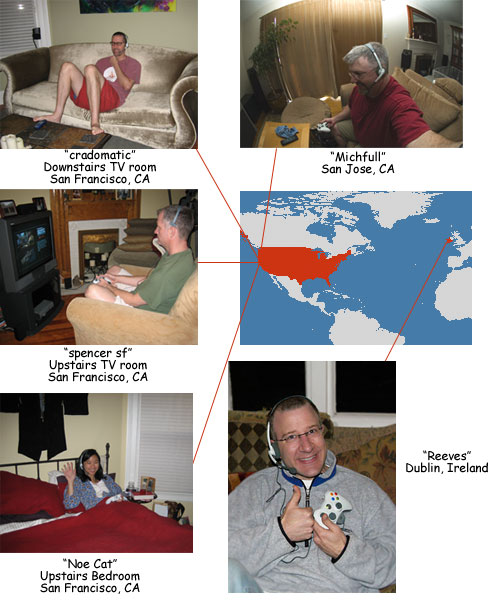 This shows the 5 players, and our location in the world.

I should mention that:

1) Yes, we do have 3 (count 'em) Xboxes in the house now. Dick really wanted to be able to watch TV in HD in our bedroom, and since the Xbox Live has a built in Media Center Extender, it was the logical solution! We do acknowledge that it's obnoxious for 2 people to have 3 Xboxes.

2) yes, I am wearing my pajamas.
It was early (kind of) and I was still recuperating from the Halloween Party the night before.

3) I don't usually actually play Xbox Live in bed.
Really, I don't. But, I was still wearing my jammies, and it was cold.

4) Christopher intentionally spent the night over here after the Halloween Party so he could be here early to play on Sunday.

5) Christopher forgot to bring his glasses with him. That's why he's sitting so close to the TV. (Kids, don't try this at home)

6) I've never been to Mike's house before, but at least now I know what it looks like! (I tease him about this regularly)

7) Did I mention that Reeves is in IRELAND?! So cool.