Well, I finally jumped on the green smoothie bandwagon. I've noticed several of my friends on Facebook have been really into this, as well as a few local friends. The idea has appealed to me for some time now, and I started really considering getting a blender for this type of function for a few months. (Dick and I don't have a blender of any kind here in Bellevue.)

Yesterday, Gina and I went to Costco. Gina went with the purpose of finding/buying a Vitamix blender. Well, it turned out that our Costco in Kirkland didn't have any of that brand in stock, but they did have a live demo going on while we were there for the Blendtec brand blender. How handy!

I totally pulled an Opus (those of you who have read "Bloom County" will know what I mean). The guy giving the demo was very good, and very convincing. The fact that he spoke like Ron Swanson from "Parks and Rec" helped, too. :) He demoed two different recipes: a fruit and green smoothie, and a green ice cream. They were both really yummy.

So yes, in pure Opus fashion, I was completely bought in. It helped that Gina was already planning to get one, and also that I had just returned a Bullet blender, realizing it wasn't the right fit of what I was looking for. For the record, We got the Blendtec Classic 570 model for $299.99. Apparently, it usually sells for $400 or so. Other models of this brand and other brands can go for a lot more, so I felt like this was a reasonable price.

This morning, I made a green smoothie out of what I had in the house: spinach, banana and an orange. I followed this Basic Green Smoothie recipe that I found online. It's 1/3 water (I used a few ice cubes as well), 1/3 fruit and 1/3 leafy greens.

I wasn't sure how much it would make, and how much I actually wanted to drink, so I started with a small batch of about 1 cup each water and spinach and 1/2 banana and 1/2 orange. That made a little more than a cup full of my tumbler cup - maybe about 10-12 oz?

It turned out to be quite tasty. I ended up making a second batch of the same size to use the entire banana and orange.

This weekend, I'll be sure to buy some kale (which we love, anyhow)and maybe some frozen berries/fruits. It'll be fun to experiment with different recipes.

Do you have any favorite smoothie recipes to share? Please let me know! 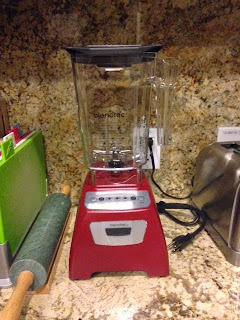 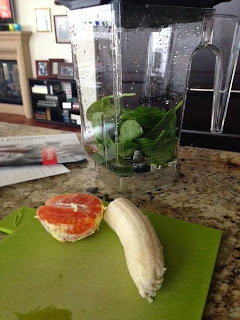 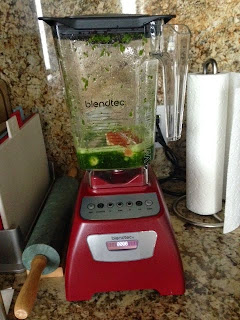 I blended the spinach in water first, then added the fruits 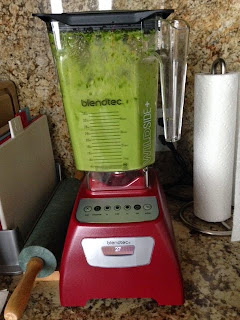 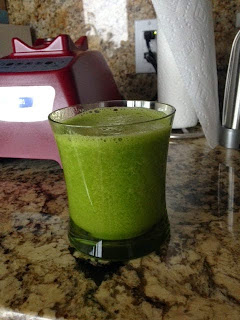 PS: Like other similar blenders, this one is practically self-cleaning! Just add a drop of dishwashing soap to a cup of water and blend for a few seconds. Dishwasher-safe, too! :)