This will probably be my last day of tracking the difference (publicly, at least) between my Fitbit and my new Apple Watch Series 3 Fitness App.

For the second day in a row, the numbers were comparable (except for floors climbed) between the two devices, with the Apple Watch having slightly higher numbers.

I don't know, but the numbers from Monday(two days ago) were off by so much; I'm still wondering if there's something to be said about my shopping cart theory (though it sounds like that shouldn't be a factor).

This morning, I didn't take the morning walk that I did over the last two days, due to rain. I had lunch in the Embarcadero today and decided to walk from there through Union Square. After walking around Union Square for a bit, I decided to walk home. It was forecast to rain today and all day tomorrow, but there was no rain earlier today, so I wanted to be outside while I could.

Lots of rain in the forecast for tomorrow, so I'm assuming I won't get nearly as many steps in.

Like I said, this will probably be my last comparison of the two devices. Turns out they are close enough to each other, and that's all I really wanted to know. 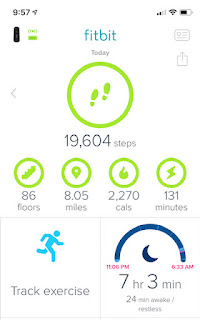 Sent from my iPhone- please ignore any inadvertent  autocorrect typos. :)
Posted by Trina at 10:15 PM