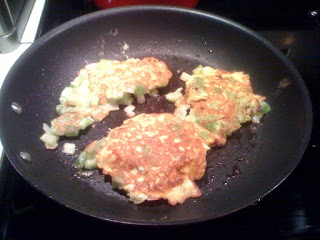 My Maternal Grandfather used to make the best Egg Foo Young. He didn't cook for us very often, so when he did, it was a real treat.

I don't make it very often, but every time I do, I wonder why I don't cook it more frequently. It's so easy, and it's so yummy. It also makes me think of him, and that always makes me happy. :)

I don't have the recipe written down (as is probably par-for-course for family recipes), so I just try to remember it off the top of my head.

Here's the recipe as I made it tonight. It turned out pretty well, so I figured it would be a good time to jot it down, while it's still fresh in my memory.

It's super easy, and really delicious.

I make it in a vegetarian style, but you could always add chopped up Chinese sausage, chicken or shrimp. :)

Heat a non-stick skillet (trust me, I learned the hard way) on medium/high heat. Add enough oil to coat the bottom (maybe 1 Tbsp)

Spoon the egg/celery/onion mixture into the pan by using 1/2 cup measuring cup.

Cook for about 3 minutes (I'm guessing on the timing here, but long enough for the egg to set, and be brown on the underside.)

Flip, and cook the other side.

Remove the egg pancakes, and keep them warm in a warm oven.

I had 5 pancakes total tonight.

Dilute the cornstarch in the chicken broth in a small bowl.

Pour the cornstarch/chicken broth liquid into the same pan that you've been cooking the egg pancakes in. Stir for a minute or so, until the liquid becomes a nice, thick gravy.

Pour the gravy over the egg pancakes, and serve. :)

It's super easy, and pretty quick.

Here's a photo that I found from our Family's Chinese New Year Dinner, 2007. This was the last time that Grandpa made his Egg Foo Young for us. (he passed away in December of that year.)
Looks like he added Green Onions to the top of it. I'll have to remember that for next time I make it. I love green onions. His is also saucier than mine was tonight. Next time, I'll make more sauce, too! :)

...and here's another picture from that day, just 'cause it makes me happy. :)