Today was Wallace's special  birthday surprise!!! Yesterday was his one-year adoption anniversary from the SF SPCA, and today we went to go visit the staff and volunteers to thank them for all they did for him last year!!! This picture has Dirk on the left, who is the volunteer coordinator. He took Wallace under his wings when he first came in and kept me him in his office with him for several days because Wallace was so sad and traumatized. The woman in between me and Dick is Christine. She came to visit Wallace after her shifts each day and sat with him and brushed him. She also did all the computer and paperwork with us when they we adopted him and even gave us her brush that she had been brushing Wallace with. We've been back to visit a few times since Wallace was adopted, but today was extra special!! We saw so many staff and volunteers who still remembered him from a year ago. They also all wore party hats in celebration of his Birthday/Anniversary, and gave him lots and lots of treats, pets and hugs.

Thank you again to everyone at the SF SPCA who were so kind to Wallace last year. We have been told that he was the most sad animal to ever go through their shelter, but he's so happy now, and they consider him to be a great success story!! ❤️ 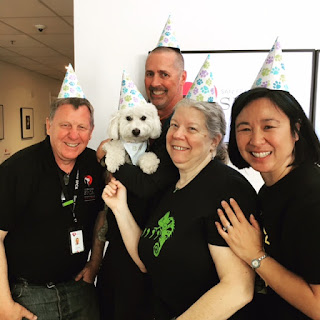