It's Time for Animaniacs! 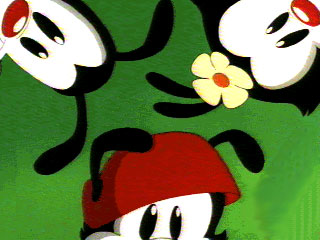 This is hugely exciting.

The Animaniacs on DVD!

I LOVE the Animaniacs!
Seriously... LOVE them!

Mykail, my sister, my Mom and I used to "tape" the episodes so we could all watch them together in the evening. I had the CDs - I wrote the color guard tryout routine to one of the songs one year when I taught at James Logan High School. (I used the song that listed all of the countries in the World - the kids thought I was so cool). I dressed up as "Dot" for Halloween one year! (which I suppose, made me "the cute one") 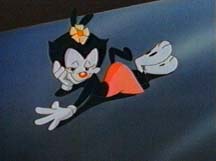 And here's the topper: I even named one my pet rats "Dot". (which also made her "the cute one") 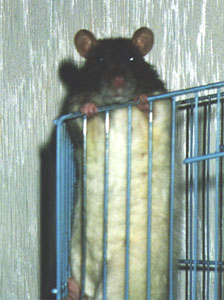 I'm really excited to hear that a DVD is finally being released. I had thought that the world had forgotten about The Animaniacs - after a few short years of having merchandise, VHS tapes, CDs, etc., there just wasn't anything else made.

I have a fantastic Original Production Cel from Season 1 of The Animaniacs. It's one of my favorites, and just cracks me up. I actually brought it with me to a Warner Bros Store in 1994 to have it signed by the 3 voices of Yakko Wakko and Dot. My Mom has a really great picture of Me, Mykail and my Mom taken with Rob Paulsen, Jess Harnell, and Tress MacNeille. Wow - that's pretty geeky. 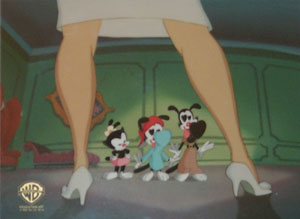 Anyhow, the DVD set is a 5-disc set, so it seems like it should have most of the episodes. update - just checked: it has 25 episodes. But, this is titled "Volume 1" so perhaps they'll release another eventually? I remember being very disappointed in the VHS tapes: they never had a tape that had the episodes with all of the Historic Figures. I always thought that some of those were the best episodes.

In case you're wondering, they are also releasing a box set of Pinky and the Brain.

"What are we going to do tonight, Brain?"

"Same thing we do every night, Pinky. Try to take over the world!"

I was listening to my iPod the other day when I drove to Stockton. I had it on "shuffle" and it played the Animaniacs theme song. Even listening to that made me happy!

I better stop typing now, before I really embarrass myself (any further).